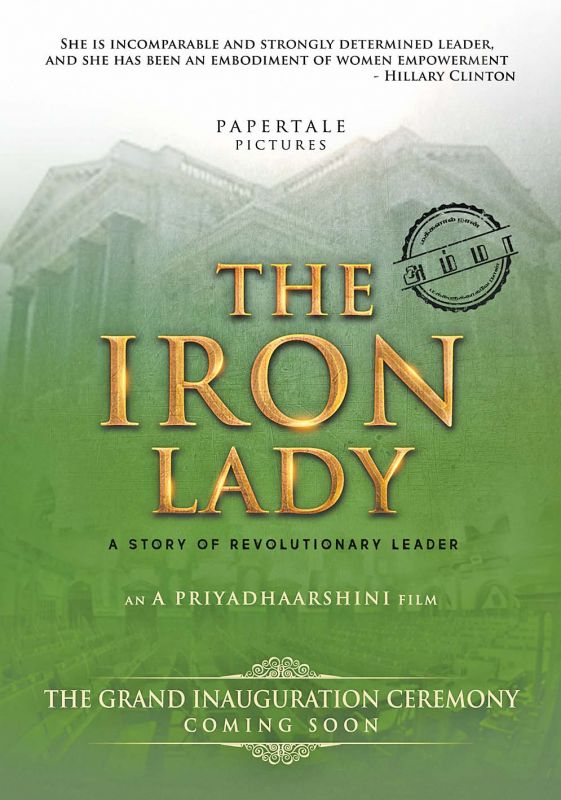 The Iron Lady TamilRockers is an emerging Tamil Indian biography drama film directed by Priyadhaarshini. The film with Nithya Menen and Varalaxmi Sarathkumar in the lead roles in this film. The Iron Lady the biography of former Tamil Nadu Prime Minister J Jayalalithaa will be published on February 20, 2020.

The first poster of Iron Lady, a film by Tamil Nadu politician and former minister J Jayalalithaa, was released on Thursday. Actress Nithya Menen should play Jayalalithaa in her biography.

Director Priyadhaarshini told News 18, “Since my childhood, I have grown up seeing her. She has been an inspirational and an iconic woman, our ‘amma’ (mother). She inspired me to do a film based on her life.”

The Tamil film crew is not over yet. Priyadhaarshini is planning to take pictures next year for Jayalalithaa’s birthday. “We plan to start filming on February 24, 2019. This is a great project and we are currently studying this film, which presents the early years of Jayalalithaa as an actor until the last days of Jayalalithaa,” he says.

He released this film go live. “Priyadhaarshini had never personally met Jayalalithaa, but when he told Jaya his last respect, he decided to talk about the end of life of this politician.

Nithya Menen and Varalaxmi Sarathkumar in The Iron Lady

In this film, Nithya Menen acts as J Jayalalithaa. The first banner launched on Jayalalithaa’s second birthday on December 5. On the poster, Nithya looks a lot like the old CM and the clothing she made in her early political days.

There are currently three ‘living’ biographies in Jayalalithaa. Kangala Ranaut from Bollywood is Thalaivi de Vijay, who plays an important role. Then there is Nithya Menen and Varalaxmi Sarathkumar lead role directed by Priyadarshini. There is also an anonymous web series by Gautham Menon, in which Ramya Krishnan plays Jayalalithaa, although there is no official explanation.

The poster well received by the locals. The poster also has a line entitled “Indian Thatcher Margaret.” The director of Priyadhaarshini is a former co-director of Mysskin. The team plans to make films in Tamil, Telugu, Kannada and Hindi.